….first came to the public’s attention in 1982 when he became Art Director of the then Bible of Heavy Metal magazine Kerrang!.

Before that he was known as Steve Joule who had worked as a freelance designer in the music industry since 1976 producing work for the likes of Motorhead, Sammy Hagar, Uriah Heep, Gamma, Girlschool, Blondie and The Sex Pistols.

He has designed album sleeves for Hawkwind ‘Live ’79’, Gary Moore ‘Dirty Fingers’ and ‘Live at the Marquee’, Iron Maiden ‘Live After Death’, Ozzy Osbourne ‘Diary of a Madman’, ‘Speak of the Devil’ and ‘Bark at the Moon’, Japan and Black Sabbath ‘Born Again’ which apparently Ian Gillan, the then vocalist with the band was quoted as saying; “I took one look at the cover and puked!”, whilst both Deicide’s Glenn Benton and Soulfly’s Max Cavalera have claimed it to be their favourite album sleeve of all time.

His work has also included designing and editing the official Donington ‘Monsters of Rock’ programmes since 1986 and he has also compered and DJ’ed the festival in 1994, ’95 and ’96. 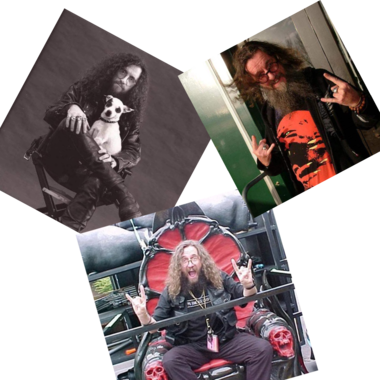 In 1989 Krusher was offered his own radio rock show, ‘Krusher’s Metal Mayhem’ by the BBC which he presented on Greater London Radio. He was also approached to host and DJ the rock night at the Hippodrome club in the heart of London’s West End.

It was a club night that would regularly see eighteen hundred people crowd into the venue where they would be treated to impromptu live performances by the likes of Bon Jovi, Skid Row and Motorhead who all frequented the club on a regular basis as did Metallica, Motley Crue and Iron Maiden or whichever rock band was passing through town that week. Unfortunately like all good things both the radio show and the club came to an end, but not before becoming landmarks in the history of London rock.

In 1992 Krusher became co-presenter along with his Jack Russell terrier Bullseye of ‘Raw Power’ the UK’s only terrestrial TV rock show and voted best TV show in the Kerrang! Readers poll in both 1992 and ’93.

In 1994 the show changed its name to ‘Noisy Mothers’ a name which Krusher hated, always believing it should have been called ‘Watch with Motherfucker’ but which again was voted best TV show by Kerrang! and Metal Hammer readers for the next two years. Sadly Christmas 1995 saw the last ever ‘Noisy Mothers’ broadcast, the powers that be in TV land deciding that rock was a dying industry and therefore warranted no place on our TV screens. 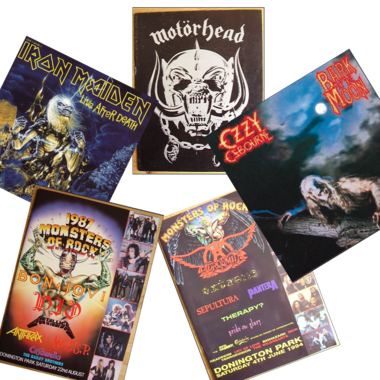 1992 also marked the end of ten gloriously debauched years working as Kerrang! Art Director as the magazine’s new publishers thought that Krusher’s behaviour was detrimental to the workings of the office and he was politely told his services would no longer be required.

Many people said that his days had been numbered after pinning the publisher’s Managing Director to the wall after a small altercation on the first day in their new offices. Krusher left with no complaints as he could see the magazine was becoming more corporate compared to its glory days. In 1995 he formed a band with Motorhead guitar hero Wurzel and Johnny Violent, hardcore techno wizard and brains behind the brain disturbing Ultraviolence.

Under the moniker WVKEAF, which stood for Wurzel, Violent, and Krusher Evil As Fuck they recorded and murdered a version of Van Halen’s ‘Jump’. It was released in 1996 and is now a most sought after 12 inch piece of vinyl not only by rock DJs but also by dance DJs as it seems to cross the boundaries of both decency and taste as far as both camps are concerned. The band split in 1997 due to horticultural differences.

In 1998 Krusher compered and DJ’ed the UK Ozzfest which resulted in him being offered the whole Ozzfest tour of the US in 1999 with Black Sabbath headlining as well as including bands such as Rob Zombie, Deftones, Slayer, Godsmack, System of a Down, Slipknot and many more.

2000 saw Krusher return to America for that year’s Ozzfest again as its compere and DJ, he also popped up doing the same thing at the UK Ozzfest.

Krusher then went on to presenting the drivetime show ‘Krusher’s Metal Mayhem’ for Total Rock but due to unforeseen circumstances and unopened wallets he left and went into semi-retirement, occassionaly dragging himself out from under his big, heavy rock to dip his hairy toes back into the media world by recording a TV pilot for a rock show. However the production of this masterpiece has fallen into the Guns ‘N’ Roses/Def Leppard school of taking forever to materialise, in fact it will be entering its fifth year of production this Summer.

Who knows, one day might see it released or at least put up on this website. Krusher also reluctantly agreed to return to Total Rock but after a few weeks couldn’t be arsed and parts of his legendary final show can be heard right here. The hairy, old git is currently busy working on his Klub Night at the infamous Embassy Club in London.

And when he’s not doing that he resides on a smelly couch in South East London where he quaffs copious amounts of lager, hails the leaf, plays hideous computer games, watches really crap television and makes his plans for world domination.