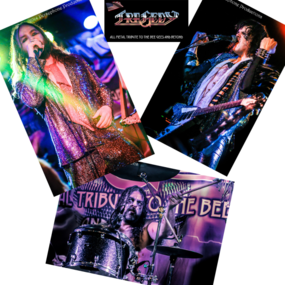 Much like their acclaimed re-working of the ‘Grease’ classic ‘You’re the One That I Want’, Tragedy have taken the Bee Gees disco classic and given it a 2017 update!!

The band recently finished the video for ‘Stayin’ Alive’ in New York with special guest star Dave Hill (acclaimed U.S. comedian) and will be launching the video clip very soon!

Their video for reworked ‘Grease’ classic ‘You’re the One That I Want’ took the U.S. by storm with 500,000 in its two weeks on You Tube!

Check out the clip here; https://www.youtube.com/watch?v=kxD_CAatY-8

Tragedy hit the UK for another fun filled tour starting on Feb 24th (full list of dates below).

What the press have to say about Tragedy…

Metal Hammer
“Camp as a row of tents, and with more hooks than hell’s cloakroom, Tragedy guarantee it.”

Tiny Mix Tapes
“Tragedy manage to dwell in the realm of novelty while far exceeding their worth as a concept…the aesthetic is somewhere in between the flamboyance of the disco-era Bee Gees and the flamboyance of mid-eighties hair metal, with some extra flamboyance thrown in for the sake of flamboyance.”

VH1
“You’re the One That I Want” Heavy Metal Tribute to ‘Grease’ is as great as it sounds. They created a music video for the cover, and it is exactly what you’d think a heavy metal version of Grease would look like. Between the crazy outfits, wild hair, air guitars, and locker room parties, the only question left to ask is, why hasn’t this idea been adapted into a full length movie yet? We want more!”

Loudwire
“One of the hottest videos on the internet. These kids aren’t the leather jacket-wearing greasers from the ’50s, but rather a modernized hard rock band of brothers attending the Our Lady of Perpetual Decimation high school. When the leader, Disco Mountain Man, arrives back in the halls, he’s greeted by his buddies who ask him what he’s been up to all summer. And much like Grease, it’s revealed that he met up with a girl. But this is no poodle-skirt wearing young lady. Instead, it’s an anarchy-loving blonde bombshell decked out in black and red. What follows is a re-imagined version of the song, with an ominous opening bass line and killer vocals from Mountain Man reminiscent of some of ’80s metal.”

Village Voice
“Everyone from Feist to Tom Jones has covered the disco hits of the Bee Gees, but perhaps no one does those gooey soft-rock numbers better than Tragedy…Shiny costumes, dramatic eye makeup and headbanging hilarity…” 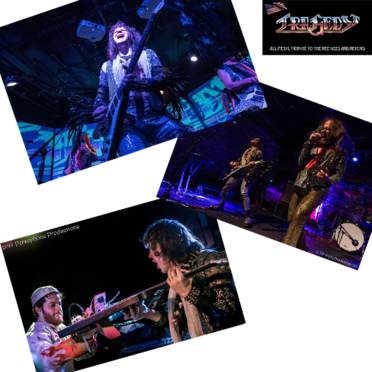 Metal Rules
“The greatest heavy-metal-meets-disco party you could possibly wish for.”

Kerrang
“Back in the dark days of disco, the Bee Gees were the shit, despite having massive teeth, bigger hair and a falsetto only dogs could hear…with the righteous power of heavy metal, We Rock Sweet Balls and Can Do No Wrong mixes Guns ‘N’ Roses swagger, the Scorpions’ sense of pomp and Judas Priest-esque vocals to create a sound that is exactly like The Darkness!”

Billboard
“Decked in their hair-metal finest, with no can of Aqua-Net spared, Tragedy frolic on the beach, woo their ladies and then unleash their thrash chops in the most anarchistic pep rally this side of “Smells Like Teen Spirit.” The result is hilarious and arguably even more heart-warming than the original, not least for the visual pun unleashed on the line ‘it’s electrifying.'”

Guitar World
“Tragedy: All Metal Tribute to the Bee Gees & Beyond has indeed pulled off a spot-on hair-metal spoof of the song, complete with a locker-room scene that takes place at Our Lady of Perpetual Decimation High School.”

USA Today
“A note-perfect hair-metal spoof of You’re the One That I Want, complete with a locker scene set at Our Lady of Perpetual Decimation High School. Only instead of pony tails and poodle skirts, the girls have teased hair and tattered Hot Topic outfits. You’ll never see Danny and Sandy the same after this metal ‘Grease’ cover.”

NYC’s Tragedy: A Metal Tribute to the Bee Gees & Beyond, is an over-the-top bombast of Disco, Metal, Glitter and Magic – the #1 Party Band.

Born out of the impenetrable divide of Disco and Metal, these six fearsome brothers fearlessly obliterated the truce line that had been set in the great Disco/Metal Peace accord of 1977 when they seamlessly blended the two genres with the debut album, We Rock Sweet Balls and Can Do No Wrong, which was a collection of Bee Gees songs redone in a heavy metal treatment reminiscent of Iron Maiden, Guns N Roses and Aerosmith. Since then, they have crisscrossed the globe with their spectacular live shows and having stormed across the USA, UK, Germany and Switzerland. Subsequent full length albums, ‘Humbled By Our Greatness’, ‘Death To False Disco Metal’  and ‘The Solo Albums ‘ have seen them spread their glittered wings to take on non-Bee Gees classics from the disco era, soft rock anthems and party jams.

The band’s latest creation, the unrelentingly glorious sensuality that is ‘The Joy of Sex’ is released worldwide February 2017

In 2015, Tragedy broke the internet with a viral video featuring their take on You’re the One That I Want from the Grease soundtrack.

Tragedy has headlined festivals such as Bloodstock, Rebellion, Summer Breeze and Hammerfest.