The Sex Pistols sold in excess of 500,000 albums and singles during their brief 2-year career; they have gone from being ‘Britain’s Most Hated Band’ in 1977 to headliners on the festival circuit in 2008.

With this in mind, interest in The Sex Pistols has never been greater.

Even today Sid Vicious makes many an appearance in contemporary popular culture finding his image upon many a High Street t-shirt or bedroom wall.

Hell, even Johnny Rotten has been on ‘I’m a Celebrity’ and can currently be seen on TV promoting Country Life Butter!

With the above in mind and recognising the huge interest and demand for The Sex Pistols and for punk rock in general, four professional dedicated musicians and lifelong punk fans set about forming the perfect tribute act to salute the success and satisfy the public demand.

THE PISTOLS formed in 2004, and is a full blown Sex Pistols tribute act recreating the rawness of the original band.

They hail from good old London Town where the UK punk movement was born way back in the 1970’s.

THE PISTOLS are a frighteningly close authentication of the original band but with added flair, charm, wit and humour. 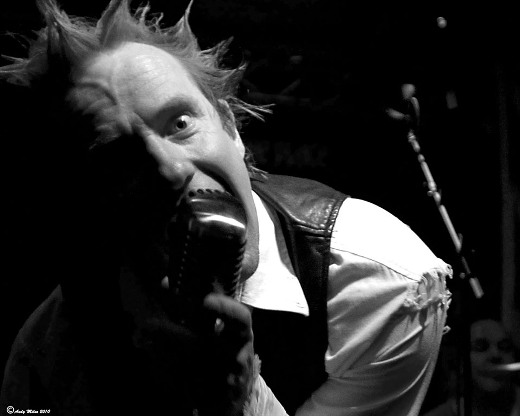 With front man Paul a dead-ringer for Johnny Rotten himself.

The band perform a blistering 90 minute show which includes all of the anti-hits made famous by the Sex Pistols in the late 1970’s, such as Anarchy In The UK, Pretty Vacant and God Save The Queen. Add to this a special ‘Sid Sings’ tribute to the notorious Sid Vicious, including I Wanna Be Your Dog, My Way, Something Else and C’Mon Everybody and you are all set for a spectacular show.

The event that is THE PISTOLS provides an excellent opportunity for Dads and Lads to bond, bridging the decades of rock music and introducing new, younger fans to the classic sound of 1977. Younger audiences are able to trace the punk family tree and see what it was the made the likes of Nirvana, Oasis and Green Day first pick up their guitars.

Noel Gallagher: “You could put together a Best Of from the Clash’s 5 albums and it wouldn’t be worth a wank next to Never Mind The Bollocks”

And of course there has to be something for The Ladies: Sexy Sid Vicious performs his encores stripped to the waist!! (and if the cheers are loud enough his swastika Y-fronts!)

Gone has the intimidating hell-raising legend that hallmarked the original Sex Pistols, replaced by fun filled banter and on-stage antics that will make even the hardest nosed audience smile; but never once sacrificing the raw, driving sound of British punk at it’s very very best.

THE PISTOLS have played all over the UK, in France and The Channel Islands. From Birkenhead to Hereford and Hartlepool to Windsor. Bikerfests, Beerfests, 50th Birthdays, Pubs, Clubs and Weddings, always wowing the crowds with their special yet authentic brand of fun-punk.