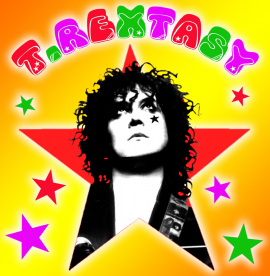 Marc Bolan is now considered the absolute innovator of the 1970s glam-rock scene and the very first superstar of the 1970s. From 1970 to 1976 he had written 15 Top 20 hits including ‘I Love To Boogie’, 20th Century Boy, ‘Ride A White Swan, Metal Guru, Jeepster, Get It On, Hot Love, and Children of the Revolution, and between 1968 and 1974 had notched up 9 top 20 albums with titles such as ‘Electric Warrior’ and ‘The Slider’.

On 16 September 1977, at the age of 29, Marc’s life was cut short due to a fatal car accident. Now 40 years on in 2017, T.Rextasy commemorates 40 years since Marc’s passing and celebrates what would’ve been Marc’s 70th year, by recreating the authentic sound and the Bolanic imagery that Marc possessed by playing all those iconic hits totally live and with the energy and passion that fans of any generation will enjoy.

T.Rextasy have played various and prestigious gigs throughout their 25 years of gigging around the world, such as performing at the ‘Billy Elliot’ film launch premiere party in London’s West End, appearing on BBC1 ‘Battle of the Fantasy Bands and claiming the title of ‘Best Live Tribute Band in the UK’, and playing ‘BBC’s Proms Night in Hyde Park’ in front of a crowd of 40,000.

June Bolan (Marc’s wife), after seeing Danielz and the band perform at Wembley Arena, commented “If there was anyone to follow in Marc’s shoes, I’d like it to be you!” 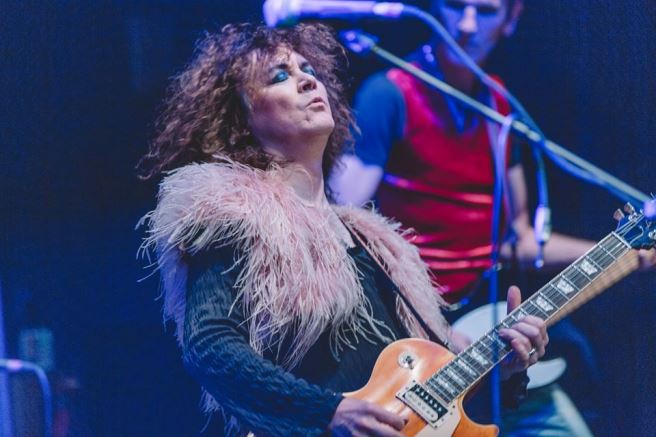 T.Rextasy are now accepted as the world’s only official live tribute band dedicated to Marc Bolan & T.Rex, and the only band endorsed and approved by Marc Bolan’s family, estate, original ex-members of T.Rex, and Bolan’s catalogue management. The band is consistently described by many as ‘legendary’ and ‘beyond the boundaries of tribute’.

It’s been said that If you want to know exactly what a Marc Bolan rock’n’roll concert felt like in the 1970s, this gig is for you!

With their Marc Bolan doppelganger lead vocalist and lead guitarist, Danielz, they have performed at most of the Arenas in the UK, playing alongside many of the 1970s original contemporaries such as Wizzard, Cockney Rebel, and Slade. In September 2007 and 2012 they headlined their own sell-out concerts at the Shepherds Bush Empire with their special guests Marc Almond, Gloria Jones, Boy George, Linda Lewis, Shakin’ Stevens, Sandie Shaw, Noddy Holder, Alvin Stardust, and legendary producer Tony Visconti, and others!

The band also had accepted invites from ex-members of T.Rex such as Mickey Finn, and Marc’s son Rolan Bolan. Dino Dines, long-time member of T.Rex, actually joined T.Rextasy and remained with them until sadly passing away.…

Danielz was offered the first ever publishing deal to a tribute artist to write a book about his ‘life in a tribute band’. Entitled ‘The Spirit of Marc Bolan’, it was issued by Wymer Publishing with world-wide distribution in 2012. In May 2015, Danielz was invited by Marc Almond to perform the Bolan hit ‘Hot Love’ at his sell-out date at Shepherd’s Bush Empire.

June 2015 saw the release of ‘Blue Moon Juice’, a CD album released by T.Rextasy on Madman Records of which Tony Visconti (Bolan’s producer) commented “the vocals are superb and the band sound great!”

2017 sees T.Rextasy embark on a UK theatre tour covering the length and breadth of the country, and have been booked to perform at a special London anniversary gig with the likes of Tony Visconti and Marc Almond on Marc Bolan’s 40th anniversary date.

T.Rextasy – awarded ‘The Best Live Tribute Band in the UK’ by BBC1 TV.

‘They’re the closest you’re ever going to get to the real thing’
~ Bill Legend (original T.Rex drummer)

‘T.Rextasy is the tribute act who breaks all the rules by being bloody brilliant. Danielz is an exact replica of Marc, he’s uncanny.
~ The Independent on Sunday

‘Danielz is a curator of Bolan’s life, a perfectionist protector of the legacy – T.Rextasy play with a poignant, flamboyant skill.’
~ The Observer

“Danielz is more than a career lookalike. Here we have a serious guitarist with the animal grace of early Bolan and the clear un-equivocal love of the music”
~ The Stage