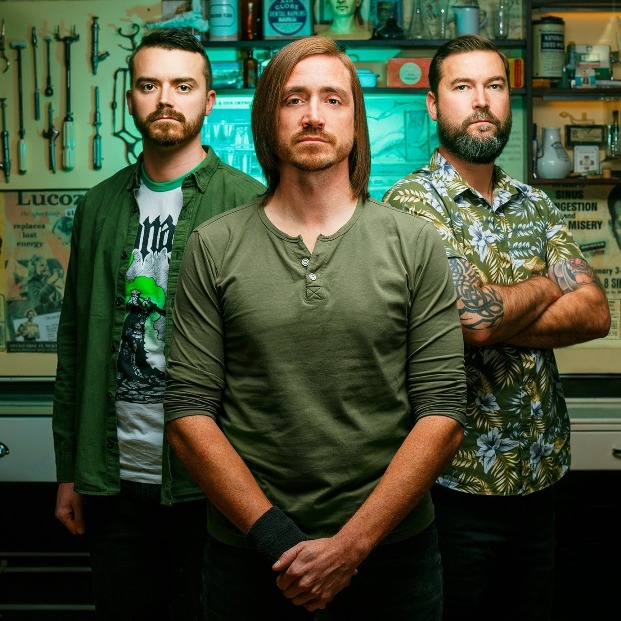 Formed in 2011, SKAM are a hard rock power trio band from the middle of England.  They have a reputation for delivering no nonsense, gutsy, contemporary sounding British rock music.

Over the last 10 years, the band has worked tirelessly to build a solid following in the UK, and now they are widely considered to be at the forefront of the ‘New Wave of Classic Rock’ movement that is currently sweeping the nation.

With 4 studio albums and 1 live album, the band deliver both in the studio and on the live stage. These 3 guys produce a sound that is unheard from a 3 piece. Having played in every major city in the UK totting up over a whopping 1000 gigs, be prepared to experience the most fun at a gig in years!

“Skam are a classic power-trio – ballsy, big, loud – but that doesn’t mean they have to be mindless. Third album, The Amazing Memoirs of Geoffrey Goddard, is a bit more ambitious than the usual new British rock. A concept album about a test pilot from 1935 ‘who is a victim of strange forces that jolt him through time’, the album artwork, videos and booklets will help tell his tale as he battles to return home and at times, for his very sanity.”  – Classic Rock Magazine

“Very big and very loud (you wouldn’t think there are only three of them), this Leicester troupe blend Clutch-esque grooviness with a dash of stoner fuzz and lashings of classic rock-based riffage on Between The Eyes. Nice.” – Classic Rock Magazine

“SKAM embody what is right with today’s young rock scene – and thanks to The Amazing Memoirs of Geoffrey Goddard they have just delivered their finest, most complete and most original album to date.” – Great Music Stories

“Leicester three-piece SKAM are on heavy, hooky form with Take It Or Leave It. Part melodious Monster Truck beef, part Clutch-nodding grooviness, there’s much merriment to be had here.” – Classic Rock Magazine

“A raucous take on Zeppelin beating up Clutch in a lo-fi grunge street fight.” 9/10 Powerplay Magazine

“Currently at the height of their game.” – PlanetRock.com

‘’THE only band that can keep up with us on and offstage. Leading lights on the current British Rock revolution! They impressed us greatly, both as musicians and as people, a rare package’’. – Paul Mahon, The Answer

‘’SKAM are bigger, louder, and a lot more fun than a three piece should be! Get along and see them now if you don’t want to miss out!’’ – Luke Morley, Thunder